Based on my previous Atlantic Bigeye Sixgill Shark research article, it is a newfound species.

How does the shark feel when being satellite-tagged? Does it moves carefully? Does it feel uneasy to move? Does it attempt to sway away from the satellite tag from its tail? They may feel slight pain when their tissue sample is being collected.

They specifically describe this shark as “elusive apex predators”. According to the Oxford dictionary, elusive means difficult to find, catch and achieve. Thus, they were tagged by the curious scientists and researchers.

This story is inspired based on a newfound shark species. Its image link leads me to New Shark Species Discovered research team led Florida Tech professor. According to the news, the researcher used longlines baited with tuna into the 2645 meters deep ocean. They collected its tissue samples and even satellite-tagged this shark. 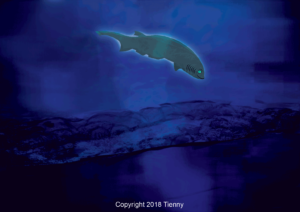 The Atlantic Bigeye Sixgill Shark loses its way towards the Atlantic ocean. Its unique features alarm the divers. Divers inform the researchers and scientists. Days passed. Swim around and sleep amongst the stones. Suddenly, a tuna stuck at a long rod comes. It gulps it. Then a black metallic plastic dives down. It snaps onto its tail. Scientists and researchers are able to observe the shark. Knock a rock. Knock a coral reef. Eat another tuna. Next day, it does the same thing repetitively. Enthusiastic researchers and scientists lose their sleep. Many days have passed, they are disappointed by the lonely lost shark. They give up and go home. A Pentagon hard half-sphere intrigues it. 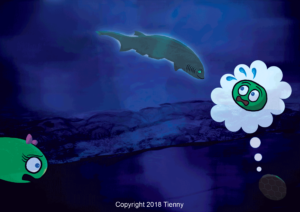 Another same shark species swim across. Then they swim towards their home.