I have watched Avoid Sharks BBC video and wrote https://tienny.com/turtles-predators/ research. In summary, based on the new found research, when there is a shark, the turtles will hide and keep still. During night time, turtles have to do careful dance around the sharks in order to run away from them. 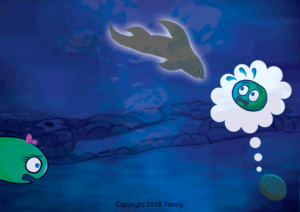 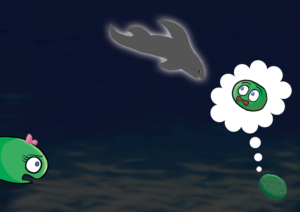 Thus, this illustration focus on the shark. And I was inspired to design a shark character. Upon designing the character, I had to observe the ocean colours and designing it. Then a creative friend highlighted to me to darken the turtles and add the rocks. Due to that, I re-watch the BBC video and did an image research on rocks in the ocean. It helped me inspired to design and colour the rocks. Next, the created two ocean colours give a different feeling. The top illustration gives the brighter, cuter and fantasy-esque feeling. Fantasy-esque terms are the feedback from the creative friend. However, the bottom illustration gives a dull feeling.

Since the shark is the turtle’s predator, I begin to think of the turtles’ first reaction upon seeing a shark. Obviously, they do not want to meet the shark. Most probably, they are going out together, but coincide with the shark. Alternatively, they are swimming in a certain place without realising a shark comes.

Thus, the story of this composition is about the baby turtle is following its mother. Mother feels so safe to have her baby follow her. The baby turtle curiously stops and look around. She swims to the other side. Call. Call. Call her child. No response. She looks back. A shark passes by. Instinctively, her son pulls its head and flippers into its own shell. Mother watches him until a shark passed by. The following haiku poetry is the summary of this story concept.