In my previous article about Why the Chinese love turtle?, turtle soup is one of the most famous Chinese dishes. Thus, I do more research on the origin of turtle soup.

According to China Culture, turtle soup story originates from the Shang Dynasty (1600-1046BC) founded by Emperor Tang. Yi Yin was a renowned cook and created china’s cooking culture. Emperor Tang promoted him to be his prime minister. Thus, I checked about Yi Yin. Based on China Imperial, Yi Yin’s original name was Ah Heng. He was a slave of the Youxinshi family. He used his cooking skills to convince Tang of his good ideas. Hence, he won Tang’s trust as a cook and had the ability to govern the country. Thus later cooks participated in politics. Peng Zu, Yi Ya, Shao Kang, Zhuan Zhu were the mentioned cooks during the Chinese dynasty. During Zhou Dynasty the fairly advanced economy resulted in abundant cereals, vegetables and meats. Staple and non-staple foods were plentiful. Around 100 different animals were available. Turtle is one of them. Thus, Chinese imperial cuisine took shape. Therefore, imperial food was a higher standard than the Xia and Shang dynasty. Hence, famous dishes, feasts and banquets appeared one after another.

In ancient China, the turtle is part of the delicacies in Han dynasty. They and the soft-shelled turtles are considered as strengthening food. Turtles are cooked with different methods such as boiled, roasted and even stewed. During Tang times, the city of Canton present Green-turtle calipee as a tribute to the royal court. Frederick explains that “Calipee is a fatty, gelatinous material found immediately over the lower shell of a turtle, a delicacy used to flavor soup.“(Simoons, Frederick. Food in China. CRC Press, 1991.)

As I read through my findings of turtle soup, I can imagine turtles are shouting for help when they are cooked. Poor fellows. 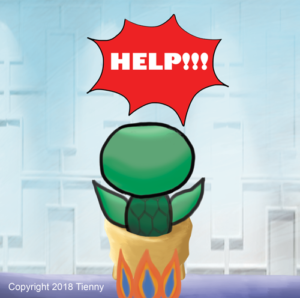 Currently, I am working on my children’s book about the baby turtle asserting its dislike in brushing its teeth. After I illustrated one part of the picture book, one of the postures also looks like that it is asking for help.

Why do the Chinese love 💕 turtle?
What are the differences between turtles and tortoises?