On Sunday (4 November 2018 afternoon), I feel so privileged and honoured for Kitaab Publishing to arrange Turtle City : Cavity Monsters book launch event at Singapore Writers Festival. They have arranged the overall session for a smooth transition.

The idea of this book was birthed in year 2013 when my son was three years old. He began to lose interest in brushing his teeth. It was a great challenge back then to engage his interest to do so. Many questions started to flash in my mind : “What if people don’t brush their teeth? What if the teeth are gone? And all the characters of cavity monsters appeared in my head. Visual events and situations of stories flowed through in my imagination. I shared the story verbally with my son. The story convinced him to take action. To resume the good habit of brushing his teeth. Until now, he is anticipating for more such stories. It is a challenge to share a series of stories to him as bedtime stories and I have to vary the stories and come up with ones.

Finally, I chose to develop this story concept in visual and written form. Along the way, I took up courses and workshops to further improve my skills. A few of my friends have been helping me with the birth of this idea and story. And also gently highlighted the visual inconsistencies and improved my writings. Besides that, I would like to thank for the support of Mr. Zafar Anjum in the publishing of this book and Ms. Shabana for her kind patience to see this book to completion in final print.

The inspiration for this idea comes from home interacting with my son. And the story is about family. Preach reach each child. But preach to them too much, they will be irritated. It is better to tell them stories that capture their interests while being conscious of their short span of attention. And I want the story to be captivating for kids as well as parents.

This book marks the beginning of a series of my future books on hygiene. The next series will be about nailbiting.

In total, there are seven plus four characters in the book. There are two groups of families. One is the protagonist and the antagonist. The other one is to be a group of armies where the names have been improved along the way to make it easy for the kids to pronounce.

In 2014, I begin working on this book. So, the total production of this book is four (4) years. Two years of pre-production, and the writing process. Another two years of giving more full focus towards this final book.

Why did you name the book ‘turtle city’? Why it is city? I love turtles. This story series revolves around a family of the pre-historic turtle family that are still alive somewhere in the remote part of the sea. Thus, pre-historic turtles are found in modern times with their strong intrinsic values. Usually, turtles live in the sea. The ocean is a very deep place where many sea animals live. I like turtles due to their patience, persevering, and hardworking characteristics though they are not fast animals.

Later on, Mr. Zafar Anjum and Ms. Shabana Zahoor arrange with Perine towards the book signing with my kind supporters. 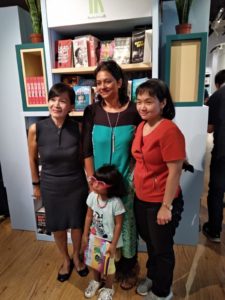 The presence of Shabana Zahoor with her daughter and Perine Seah 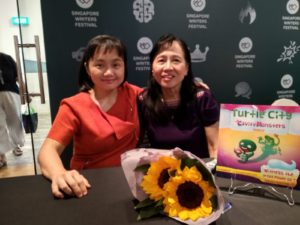 The presence of my mother 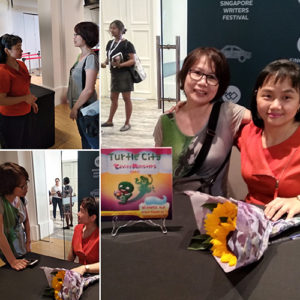 The presence of Teresa who gives sunflowers 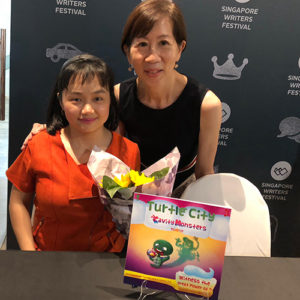 The presence of Katherine Seow 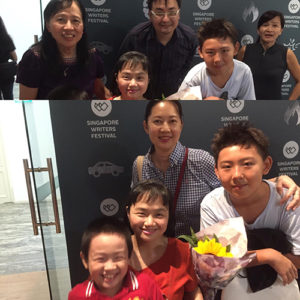 The presence of my mother, husband, son and Perine with Jessica Yeo and Kisato 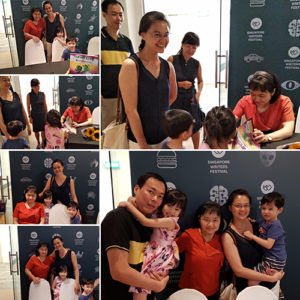 The presence of Rusyinni and her family members 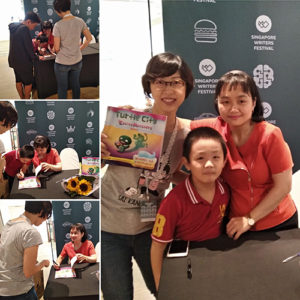 The presence of Evangeline Neo 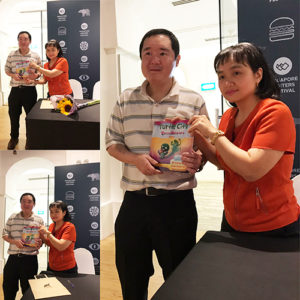 The presence of Winston Chan